Stitches in Time a ‘must see’ exhibition

Posted by Daniel Hatton on 14 September 2015

The exhibition, ‘Stitches in Time – Stories of the WWI Rylstone Autograph Quilt 1915′ was officially opened on Friday evening at the Rylstone Memorial Hall where a large gathering discovered just how fascinating the exhibition is.

During the welcome, newly elected president of the Rylstone and District Historical Society Shirley Tunnicliff explained that 27 people were involved with research for the project. She also thanked district schools who made around 1500 poppies for the exhibition.

Immediate past president and curator Helen Marsonet explained that when she first discovered that the quilt existed she became very excited.

“I had absolutely no idea it existed. I contacted someone at the War Museum and he told me there were 49 soldiers’ names and 900 other names. We had no idea what it was all about.”

Mrs Marsonet started researching and discovered the quilt was very unique. It was white embroidery on white cloth and also one huge piece rather than separate pieces. People signed their names in indelible pencil and then it was stitched over.

“One of the society’s supporters Dan Hatton from Gunnedah was going to Canberra and he photographed the quilt. From that we made a list and put it out on local media and people came forward. I laid all the research material on my kitchen table and Virginia Hollister came and helped. It was very difficult to identify all the people at first,” she said.

The historical society then decided to put on a special exhibition to view the culmination of all their work. Of the 966 autographs they ended up with two thirds researched and from that selected about 120 names for the stories that are on display.

Using the quilt signatures as the starting point, the exhibition features biographical vignettes, photographs, uniforms, badges, flags, and other items to tell the social history of the district at the outbreak of World War One.

It’s a fabulous exhibition and is a must see for anyone interested in history. The exhibition will remain open from 10 am to 4 pm daily until this Friday, September 11.

There will be demonstrations of embroidery in the manner of the quilt, army sock knitting, and table loom weaving. War poetry will be recited daily at 2 pm. Entry is by gold coin donation. This is an official History Week Event presented by Rylstone and District Historical Society. 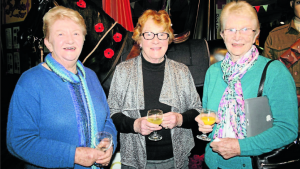 Maureen Brodie (nee Carter) Helen Marsonet (nee Norris and Gwen Potter (nee Mulholland) all went to Rylstone Primary School together. It was a great thrill for them to get together again at the exhibition opening. 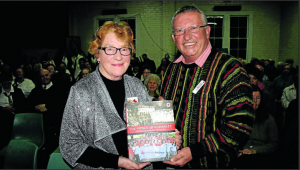 Following his address on the connection Red Cross had to Australia Day 1915 and fundraising over the last 100 years, John Pocius Manager of the Greater Western Area of the Red Cross Society presented Helen Marsonet with the book “The Power of Humanity” celebrating 100 years of Red Cross from 1914 to 2014. 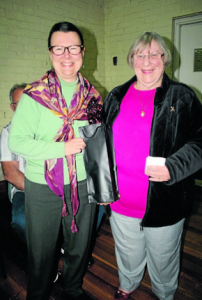 Virginia Hollister was also presented with a gift from Shirley Tunnicliff for her tireless work assisting with research and helping with the exhibition. 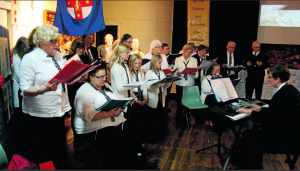 The Wollemi Voices sang stirring songs on Friday evening and received a traditional three cheers from the audience following their performance. 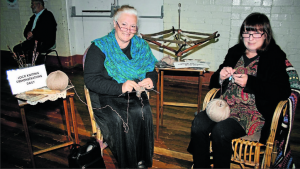 Gemma and Margo from the Convent and Chapel Wool Shop demonstrating the art of sock knitting. They’ll be at the exhibition each day. 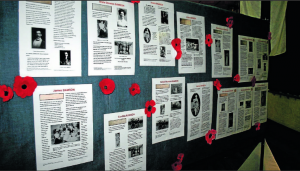 Around 120 stories of those who signed the autograph quilt adorn the display area – a mammoth task for researchers and a joy for descendants and history buffs. 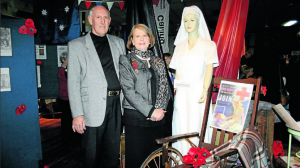 Neil and Barbara Reynolds viewing one of the Red Cross displays. Mrs Reynolds has been actively involved with the Rylstone Branch of Red Cross for many years. 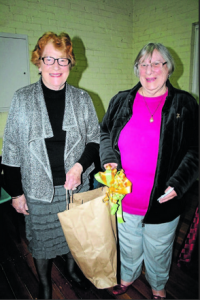 President of Rylstone and District Historical Society Shirley Tunnicliff presenting Helen Marsonet with a gift for her fabulous work in researching the quilt and curating the exhibition.