The Rylstone & District  Historical Society’s conservation of the 19th Century mural at The Bridgeview Inn is a finalist in the 2014 National Trust Heritage Awards.

The work is being undertaken in stages over three years.

According to the National Trust, the mural was “almost certainly” the work of travelling artist Augustus Pierce.

Although Pierce painted widely in NSW, hardly any examples of his work remain.

The project was carefully planned to ensure best practice conservation methodologies were followed, including documentation and treatment.

The painting is also a rare example of a mural in a rural public building.

The mural depicts a scene of the Rylstone Bridge, with a fisherman and cows in the foreground.

“This project was driven by the local historical society who realised the importance of the mural and its value to the community,” said the award submission.

“Throughout the project the historical society ensured community awareness of the treatment and ran regular talks and ‘show and tell’ sessions.”

“The project was carefully planned to ensure best practice conservation methodologies were followed, including documentation and treatment.

“Vitally important to this was dividing the treatment up into stages that could be executed within the funds available at the time.” 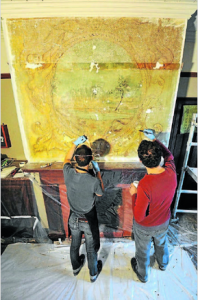