Posted by Daniel Hatton on 8 November 2014 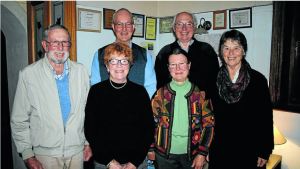 Rylstone and District Historical Society members held a dinner at the Globe Hotel Shed Bistro on Tuesday, June 3 to farewell Bob O’Neill and his wife Sally who have recently sold their property Long Gully near Rylstone and are moving to Blackheath.

Mr O’Neill played a pivotal role in the local historical society when its future was in doubt and assets including the iconic Bridge View Inn were moved to be sold at a public meeting in 2003.

Following the dinner on Tuesday evening Peter Monaghan gave a history of that famous meeting. He described how Mr O’Neill moved that the motion to sell the BVI be rescinded. His motion was overwhelmingly supported by the packed venue.

With the financial situation in dire straits, Mr O’Neill discovered he had a week to submit a 100 page grant application for $100,000. The application was successful and this enabled a major refurbishment of the BVI including re-roofing the building and repairing the stone chimneys. The first President’s Report in August 2004 noted that they had “recovered from shipwreck.” Mr Monaghan told Mr O’Neill that the society had a great deal to thank him for.

During the evening current president Helen Marsonet also thanked Mr O’Neill and his wife for the incredible help and support they have given the historical society over the years, while current vice-president Virginia Hollister recited a humorous poem she had written for the occasion.

Mr O’Neill thanked everyone for the kind words and said it had given them both considerable satisfaction to have worked with the society.

“We shall be back. This has been too much fun to let it go,” he added.