Posted by Daniel Hatton on 7 August 2015

One hundred years ago tomorrow on July 30, 1915 Rylstone and every other rural centre was in a fever of preparation for a nationally declared ‘Australia Day’ to collect funds in support of the war effort and for the relief of the wounded in the Dardanelles.

H. A. Phipps, who wrote his memories of the day stated, “Australia had been pledged to support England and France in the First World War to the last man and the last shilling by Prime Minister, Billy Hughes. Hughes named July 30, 1915 Australia Day and called on every person in the Commonwealth ‘to do their bit’, to raise funds for the war and help our troops then fighting in Gallipoli and other places overseas.”

In Rylstone, almost every man, woman and child responded to the call. On the day a huge procession made its way from Rylstone Railway Station to the Horticultural Hall.

The march was led out by the mounted police, followed by the Rylstone Brass Band. Motorcars were decorated to the hilt representing the Allied Countries of Belgium, Italy, Britain, and Russia with drivers in costume.

Commenting on the day in the Mudgee Guardian of August 5, 1915, the reporter remarked “Dr Hansard’s car, representing Great Britain, was decorated from stem to stern in red, white and blue, with the national ensign supporting a British aeroplane on the centre of the windscreen, and on the back of the car a splendid model of a British Dreadnought (the Queen Elizabeth) was elaborately set out with a submarine at its stern. 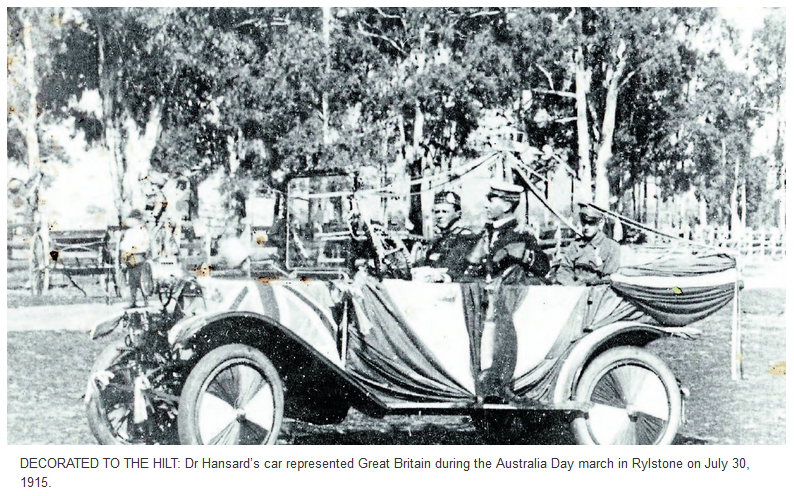 The effort must have cost the doctor much thought and hard work, and he fully deserves the expressions of admiration that the public expressed.”

The creator of the quilt was Mrs Dawson, of ‘Henbury’ who had two sons at the front lines in Gallipoli, one of whom was killed on August 6.  She and her many daughters worked very hard during July to complete the quilt in time for Australia Day. Signatures and attached donations were collected by members of her family, through the Red Cross, and by Mrs. Fletcher and Mrs. Farrer. The Rylstone Autograph Quilt raised £95.0.0 in total, and total donations from Australia Day in Rylstone exceeded £700.0.0

During the ‘Stitches in Time’ exhibition, the Rylstone and District Historical Society will be paying tribute to the more than 900 local citizens of the district who paid to have their names stitched onto the Rylstone Autograph Quilt 100 years ago.

‘Stitches in Time’ is an official History Week Event and will be at Rylstone Memorial Hall from September 4 to 11. The Quilt is in Canberra in safekeeping at the War Memorial and will not be on display, but every signature has been photographed and these will be projected on a screen running continuously.

The exhibition will be open to the public every day from 10 am to 4 pm and a program of songs, poetry and demonstrations will make this a unique and special event.