Owner calls for government support to restore a slice of history

INLAND Australia’s oldest two-storey convict barracks could tumble to the ground within two years unless the money is found to restore them.

The dilapidated two-storey barracks stand beside an 1820s homestead on historic Macquarie, between Bathurst and O’Connell.

The home and barracks were built by convict labour on 1000 acres of land granted by Governor Lachlan Macquarie to William Lawson for his role in crossing the Blue Mountains with Gregory Blaxland and William Charles Wentworth in 1813.

The barracks housed up to 28 convicts at a time until the 1850s and most remained in the district following emancipation as a condition of their release. 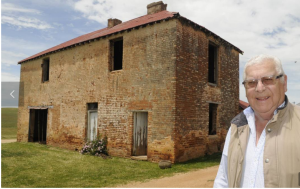 Many of today’s generational Bathurst families are direct descendants of those convicts.

Macquarie remained in the Lawson family until 1918 when it was sold to the McKibbin family.

Paul and Bonny Hennessy became just the third owners of the property in 2012 when they bought it with a commitment to restore it to its former glory.

Since then they have employed more than 250 tradespeople and labourers to work on the homestead as they slept in the shearers’ quarters out the back – without receiving a cent in government support.

“This property has great historical significance as the oldest farm this side of the Blue Mountains and it’s here due to the patronage of the father of Australia, Lachlan Macquarie, and the property carries his name.

“There remains a question over whether Macquarie ever came to the farm but I believe he did.

“We know he had been to The Grange [a short distance away] and there is an entry in his diary that says Lawson has a fine homestead and 200 acres of wheat, the best he had seen in any country in the world.”

Mr Hennessy said their situation highlighted the difficulty private owners faced “doing their bit” to retain and restore significant heritage items for the broader benefit of the community.

Even a conservation management plan for the site cost $50,000 and Mr Hennessy said he would appreciate financial support or fee relief from the tiers of government to help with the project.

With work on the homestead almost complete, Mr Hennessy’s focus is turning to restoring the barracks.

“The brickwork is the major problem and it is deteriorating rapidly,” he said.

“It’s possible the barracks have a life of less than two years before they are lost.

“In Bathurst we have wonderful sporting and cultural facilities but until recently our heritage assets have been overlooked.”

Mr Hennessy said he would like to see the barracks restored and converted to a convict museum to display many of the colonial artefacts they have found on the property, including farming tools, shoes and household items, along with a roll of names of the convicts who stayed there.

He said he would happily welcome school groups keen to learn more about colonial Australia.

“We [Mr and Mrs Hennessy] see ourselves as custodians of this property for future generations and we are fortunate to be in a position at our stage in life to put money into restoring what we can,” he said.

“But heritage buildings have just as much legitimacy as sporting and arts facilities when it comes to government support, and some would say more.

“As years go by there will be even more focus on the stories of convicts and this could become a major attraction for the region.”