Betty Edwards shut up shop at 11 am yesterday, ending her family’s 88-year history of keeping Rylstone up with the news. 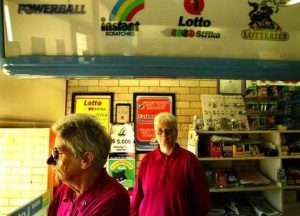 Her mother, Hilda Yarrington, opened the newsagency as a 16-year-old in 1916 when most of the men around the Mudgee area had gone to fight in World War I.

“Mum paid 50 quid to buy the business from Mr Sampson. He was going to the Western front,” Mrs Edwards said. “She was too young so she had to go into partnership with her older sisters Pearl and Gladys … bought them out when she came of age.”

The newsagency wandered up and down Rylstone’s main drag, Louee Street, occupying five sites over the nine decades before Mrs Yarrington built her own shop in 1973. Over the years, the business diversified, adding a drapery, toys, books, records and anything else that was not available in the 15 or so other Louee Street establishments.

Mrs Yarrington was even canny enough to see a future in gambling. During World War II her shop was reputedly the first NSW newsagency to obtain a licence to sell lottery tickets.

Over the years, Rylstone’s town population stayed steady at about 800, with another 3000 living on properties in the area.

Mrs Yarrington, who was Miss Cooper, married Barney Yarrington in the 1920s. They had four daughters, who worked in the newsagency after school and at weekends.

Only one daughter stayed in town, Mrs Edwards, and she took over the newsagency when Mrs Yarrington died in 1987.

“Mum had a wonderful mind for business … and she and the shop went on to be such an important part of our community.”

Perhaps the biggest event to happen to the newsagency came a year after Mrs Yarrington’s death when Mrs Edwards opened an old shed that had been locked by her mother years before.

It contained a sort of lost inventory of Mrs Yarrington’s business, including a copy of the first Phantom comic (went on sale September 9, 1948, price sixpence), a 1950s wind-up Japanese robot and a wind-up 1913 Zulu ostrich cart.

A Blue Mountains couple, Doreen and Peter Shelley, take over the business from today.

Posted under Uncategorized
Comments Off on Era ends, but family still talks shop