The mural is in the dining room of the NSW State Heritage-listed sandstone Bridge View Inn, constructed circa 1871. The mural sits above the fireplace and dates to the hotel period of the building.

The central cartouche depicts the landscape immediately opposite the hotel and shows the 1870 timber bridge over the Cudgegong River that was the main entrance to Rylstone, along with bucolic fisherman and cattle. Surrounding the central image is a decorative border of leaves with depictions of two (rather flabby) topless nymphs and the head of a Pan spirit (horned satyr). Nymphs and satyrs were associated with the Greek God of Wine, Dionysius, so are appropriate for a drinking establishment – however the artist seems to have done it all with great tongue in cheek.

Research has revealed the most likely creator of the mural is Augustus Baker Peirce (better known as Captain Gus Pierce). He was an American from Massachusetts who jumped ship age 19 in 1859 in Melbourne, went to the gold fields in Victoria, drifted into theatre painting scenery and acting, spent several years on the Murray River first charting the river and then becoming a paddle steamer river boat captain. When the river was low, he painted and eventually produced a ‘panorama’ titled “A Voyage Around the World” [a long painted canvas with many scenes unwound using rollers across the stage, accompanied by a lecture, with comic songs and etc. to round off the entertainment] which he brought to the NSW gold fields in 1871/72. He lived in Hill End during 1872/73 where he briefly ran a tent theatre, then became a miner and mining surveyor. There he painted the interior of Dodd’s Hotel in Clarke Street. He later painted another panorama titled “A Voyage ‘Round Australia” which he took through the NSW gold fields and back to Victoria. He painted the Australian panorama with the patronage of Bernhardt Holterman of the Holterman Nugget fame. Gus Peirce returned in 1892 to America and wrote an illustrated memoir titled ‘Knocking About: Being Some Adventures of Augustus Baker Peirce in Australia”.

Rylstone and District Historical Society, founded in 1963, have owned the Bridge View Inn since 1967. In 2010, a professional assessment of the mural was done to assess its condition and significance. This revealed that:

• murals of this age are extremely rare in Australia
• careful removal of house paint on the top third of the mural is possible
• although in poor condition, this mural can be conserved and restored
• The mural has significance for local, state and Australian history.

As a result:
• The NSW Office of Environment and Heritage provided funding support for its conservation and restoration
• The National Trust of Australia (NSW) set up a tax-deductible fund raising appeal. Many donations later the mural is conserved. 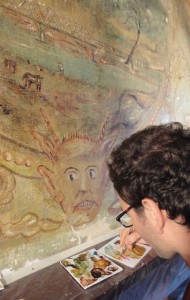 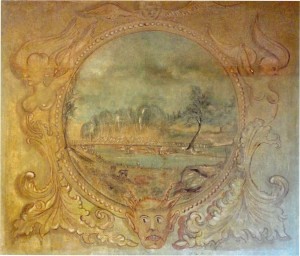